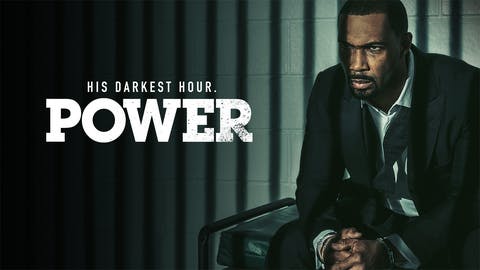 Myalogists:  I want y’all to understand, before we start, that all the events below happened in ONE DAY.

Y’all, did our dear Courtney achieve the up-until-now impossible? Did she make us like Tariq? Or at least respect him?

Reign?  Raina? Rain? Reign?  No?  Skip y’all. Our junior hero opens up the show this week denying to the police and his family that he knows anything about Raina’s killer.   Which is good because from the way his parents are acting mere hours after losing her, either they don’t know she is dead or they don’t care.  Two tears in a bucket huh, St. Patricks? So home they go from the police station, to a house full of folks, one of whom thinks it’s a good time to tell Tasha that “everything happens for a reason.” Man, eff that b.  I would have c*nt-punched her ass before she could get to talmbout mysterious ways. Even though he is surrounded by folks, Tariq finds the time to get understandably high and conduct a little intel.  He reaches out to Kanan to find out RayRay’s location, but doesn’t tell him why.  In his ONE inexplicable dumb ass move, Tariq takes Tasha’s gun and sets out for blood.  BOY, why you taking a legit gun to go kill someone? He goes over to Truth to find Dre and does what every single character Dre has encountered to date should have done – sticks a gun in his punk ass ribs and forces the truth out of him.  He tells that fucka that if he don’t tell him where RayRay at, he telling it all, every single thing that Ghost and Tommy should be present and intelligent enough to see.  Dre relents and tells him where to find the killer cop.  Tariq heads there and arrives moments before his parents and uncle. Ghost sees Tariq in the elevator from bout a block away (lol what), breaks in the building and runs up the stairs just before Tommy, followed by Tasha.  Tariq and RayRay have a ten minute conversation, recapping Raina’s death, RayRays choice of soft vs. hard shell tacos, whether or not Tariq wrapped up before fucking his lil cuz and the best way to make a great roux, while Ghost and Tommy are running up FIVE FLIGHTS OF STEPS.  They all arrive in sequential order at the door right after gunshots ring out to find Tariq standing over RayRay’s dead body – asking the same damn thing.  “Are you okay?” BANG UP JOB WRITERS. Yes Ghost, he’s okay.  Yes Tommy, he’s okay.  Yes Tasha, he’s okay.  Yeah, he’s okay, as okay as anyone in his position can be.  They take their shell shocked baby home and HIS MOTHER indoctrinates him to the ways of the family.  Murder, Destroy Evidence, Wash your Ass, repeat.  Tariq St. Patrick just came of age.

Unless you are Ghost who likes to serve it up piping hot.  Initially this fool thinks the Jimenez have killed Raina so he switches out his tux for his murder clothes and hits the streets with Tasha’s blessing.  I don’t know bout y’all but if that nigga sat in my face and told me that my “flesh of my flesh” was gunned down over his fuckery, he would have needed his murder clothes for my black ass.  G & T bust up in the Toros Locos spot with guns blazing, shooting everyone looking like they want it til they get to Uriel, who they nail gun into telling them what they believed was the truth.  Uriel tells them that the Jimenez do NOT kill children, a fact I think we can all attest to and thusly played no part in Raina’s death.  Ghost delivers one of those wack intense ass proclamations, imploring Uriel to “swear” –  LOL WHAT AGAIN – he brought no harm to his family.  Ghost must have looked like he meant business cuz Uriel started bumping them gums…told G & T that Dre set him up to kill Julio cuz – BANG!  GOT DAMMIT GHOST.  You have a real penchant for shooting (or not shooting) folks at the wrong damn time – which is usually before they give you useful information! Armed with the info that Dre is a traitor, our boys head off in different directions….Ghost to plan a funeral and Tommy to find RayRay.  Tommy busts in on Destiny, who tells Tommy exactly where he can find RayRay.  Unbeknownst to him, Tariq is already on his way to handle that problem.  Once that all goes down, G & T track down Dre leaving a meeting with the Jimenez, and discuss the best way to get at him…with Kanan in the back seat sitting on READY.

Predictions for next season yall?  We know: